Chromiah, also known as The Techno Slime Girl, is an original creation by brainstrom332000 and was designed and co-created by Animewave-Neo

Chromiah was once a human scientist named Silvia Sabil who had created a slime-like matter consuming cybernetic substance for a secret underground facility, one filled with other sexy female scientists and security agents like herself. One day, Silvia's dangerous creation broke loose from its transparent container and attacked its creator, consuming and merging with Silvia. The attack mutated the once sane scientist into the unhinged and voracious super-villainess now known as Chromiah The Techno Slime Girl. 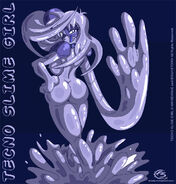 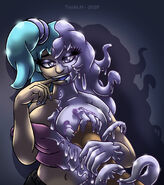 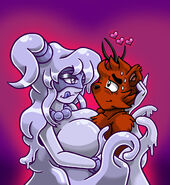