Kaios is an original character of Blaziken16 .

Kaios was an experiment created by scientists, who made use of Chaos' DNA and a dead body of a female teenager. She is later found by Sonic and Tails and was mistaken by an enemy. However, they later became friends. Although Kaios resembles their old enemy from the past, Tails is curious about her. She will always protect her friends no matter what.

She mainly resembles Chaos from the 'Sonic the Hedgehog' series. She has three horns on her head; one on top, two drooping from the back,three claws, and three toed feet. Inside her body is a pink heart, which is mainly for balance and protection, as well as serving as Kaios' life force. Her eyes are light green.

Prior to Kaios' mutation, she was an active and energetic girl who loved adventure and excitement. Sometimes she is quite serious, but most of the time she really only cares about having fun.

After her mutation, however, her personality changed. She is now a protective and brave young girl who has only one mission in life: to protect everyone from danger.

Kaios has almost all of the abilities of Chaos: Liquifying, stretching, turning into a puddle, and mass shifting. She mainly attacks with basic melee moves, such as punching, kicking, and tackling. She also possesses a strong resistance to many attacks, whether it be bullets, explosives, lightning, etc. This is possibly because of her slimey body made of water.

Kaios has her own super form if she absorbs the 7 Chaos Emeralds. Her body turns into frozen ice, and her two fins are now razor-sharped. She also gains new abilities, such as icicles and freezing attacks. 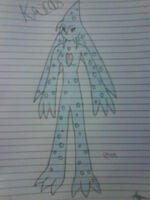 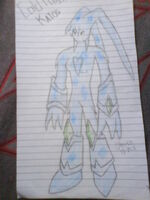 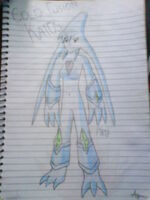 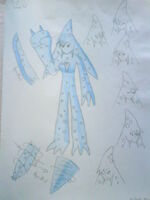