Kia is an original creation of Kaihedgie and a recurring character in the Justice Heroes webcomic series.

Kia is somewhat of a rare slime to come across. Possessing skill and aptitude for her slime powers that tend to eclipse many of her kind, Kia is a force to be reckoned with. Thankfully, she's is one of the good guys. She strives to prove that her kind are to not be underestimated, but evenly so, she wants to be great help to her friends. 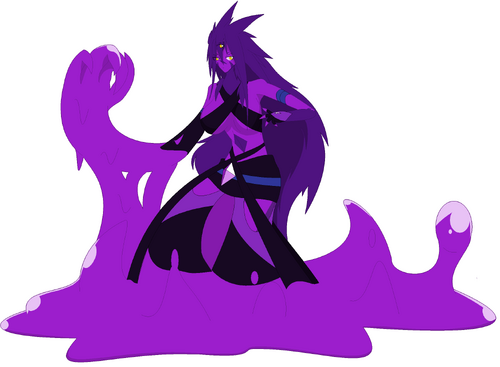 Though her appearance is usually subject to change, Kia usually appears as a purple colored young female adult with knee-length violet and spiky hair and gold amber eyes with vertical slits for pupils. Her apparel also tends to change, usually inspired by the comic books she reads. She is not self-conscious about her form and would not hesitate to abandon her humanoid form for her amorphous state which appears as a large shapeless mass with a violet diamond as the focus/nucleus from where a single golden eye emerges as her sight.

If there's two words to describe Kia in a nutshell, it's courageous and benevolent. Serving as a big sister figure to her brethren, Kia is the kind of lady to make friends with easily. Typically the loving and caring type, Kia will do what it takes to cheer up her friends when they're down. When participating in the group, she's usually the one with the common sense given the kind of characters she spends time with. She refrains herself from taking a life, even if it's a villain. However it is rare to actually see her crossed and when she is, she becomes frighteningly violent. Fatalities of her slime kin usually start a fuse. For all her smarts, she can be a bit hard-headed and tends to run head first into situations without thinking. While she does love her slimekin, she can't help but think of the people who had been transformed and have usually been driven to tragic ruin as a result of it.

Kia possesses all of the basic abilities of slime creatures such as liquefying, stretching, weapon molding, mass shifting and texture temperament. What sets her part from many other slimes though is her incredible skill and aptitude with these abilities. Incorporating them into a fighting style she was taught, she has created her own unique "Liquid Style: Ouroboros" which involves a seemingly endless barrage of attacks that flow together like a river and also incorporates her shapeless state in its fullest form. Aside from this, she also possesses symbiotic abilities, able to bond with other organisms to transform in an enhancing armor that ups a person's strength, defense and energy resources and can even actively support them as a singular hooked-claw that covers these attributes.

Her body houses a pair of rhombus shaped jewels which contain the other half of her mass, stored away in a pocket dimension, the current half she uses being compressed. Her true mass volume is extraordinary, able to grow four times her size without the other half. She can use the jewels to manifest her slime from a distance for a variety of purposes but mostly in apprehension and defense.

Kia's biggest weakness is ice, instead of light. Because of her unique liquid composition, Kia becomes quite brittle and ill in excessively cold temperatures so a simple ice spell or attack is enough to effectively damage her. While she can revive after being frozen and shattered, she will become very sick after the reconstitution. Despite her immunity to most physical attacks, she can feel the force of these strikes and can be knocked out by particularly powerful strikes.